A stray pooch in Suwalki, Poland was roaming around for a place to stay when he happened to come upon a tar. Not knowing that he could get trap, he lays down on it, and he gets stuck.

The trapped hound was unable to move.

And after realizing that he couldn’t get himself out, the poor hound barked with all its strength for help. Workers near the area heard the noise and sought to find out where it came from. When the people found him, they immediately called Joanna Godlewska, a rescuer from Niczyje Animal Foundation. 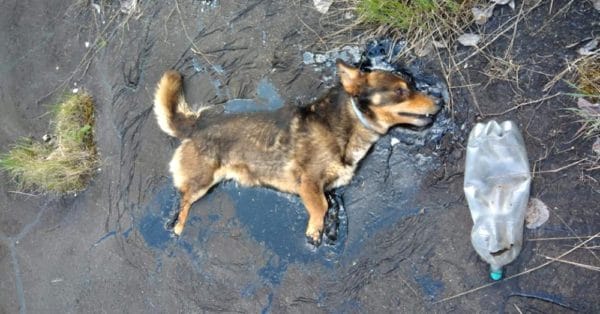 Seeing the pup’s situation, Joanna could not help but tear up. The trapped hound was barely able to call out for help. Thankfully he got his snout out from the sticky material that allowed him to bark.

Together with the local police and fire departments, they began the operation, to free the trapped hound.

They proceeded to cut out the pup’s fur that stuck on the tar and used oil to counter the matter.

After some time, they finally got to remove the trapped hound! They brought him to a veterinary clinic afterward, and there they found a hundred ticks from his body.

The staffs then gave him warm baths and meals to retrieve his strength.

The rescuers named the tiny guy, Farcik. Joanna would stroll with him now and then bonding, and slowly discovering bits about the dog. The Niczyje Animal Foundation shared that Farcik now rests and there is nothing to worry about as his recovery goes well.

Far from his condition before, he is showered with love and support from volunteers and from his followers all around the world. When he gets a full recovery, he is set to be put up for adoption.

We sure know, people are already waiting for that time, so don’t forget sharing this story; your little effort might help find Farcik’s best match!

Here is another rescue story of the Colorado dog lover and the goldendoodle.

Manchester Airport sniffer dogs are now under scrutiny after failing …

Every dog owner would like to learn how to teach …

I'm a dog lover, a published author and a part time blogger. I like to share stories about dogs to my fellow dog enthusiasts! I hope you enjoy them! amazon.com/author/charlottejones

Our website is made possible by displaying online advertisements to our visitors. Please consider supporting us by disabling your ad blocker.